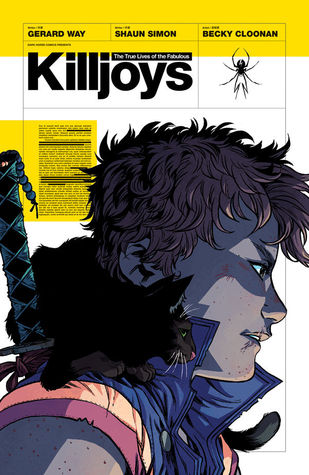 Title: The True Lives of the Fabulous Killjoys

Years ago, the Killjoys fought against the tyrannical megacorporation Better Living Industries, costing them their lives, save for one—the mysterious Girl. Today, the followers of the original Killjoys languish in the Desert while BLI systematically strips citizens of their individuality. As the fight for freedom fades, it’s left to the Girl to take up the mantle and bring down the fearsome BLI!

Having no prior knowledge of the Killjoys, I read the book as a complete standalone.  I thought it was ok, perfectly average as a book, and thought nothing more of it until I read the afterword by the two authors.  I soon realised that this wasn’t just a book, it was a whole concept created by rock band My Chemical Romance.  For other readers like me, I implore you to first watch the music videos to ‘Na Na Na’ and ‘SING’ (posted below) before going anywhere near the book.  Knowing this now, it is very difficult to review the book as a story in its own right.

Since I missed out on these videos, it was only a chapter or two into the story that the plot finally clicked into place for me. Up until that point, things felt a bit disjointed – I felt that I was entering a world that had already established itself (and it had, as the members of My Chemical Romance were literally the original Killjoys).  However, there were actually a number of subplots within the story that I found more engaging than the overall plot. The story of Blue and Red, two droids from Battery City, were the most interesting, and I would have liked to have known more about them.

I quite liked the style of drawing – it fitted the genre. Some drawings of the characters were better than others, but I appreciated the effort put into bringing Battery City to life.  Again, having now watched the videos, I can see that a tremendous amount of thought has been put into recreating the original concepts.  For example, the girl’s attachment to Party Poison’s yellow mask in the book pays homage to the final scenes of ‘SING’.

Overall, not a spectacular read but for science fiction lovers like myself there were a lot of interesting concepts and a few plot twists (who the BLI spy turned out to be was a good one). It took me a little while to get through it, but it is easily a one-day read. In a way, it is a shame it isn’t longer – I would loved to have known what happened afterwards, and to have had more backstory on the Killjoys within the book.  I feel it isn’t very successful as a standalone, but fits perfectly into the world of the Killjoys, and in that sense it can’t be faulted.