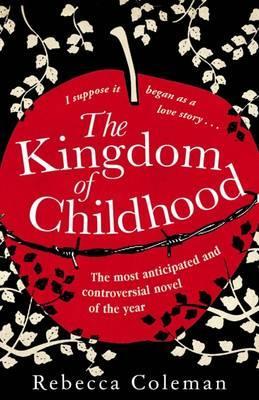 Title: The Kingdom of Childhood

“I have learned that all anyone ever wants is to feel at peace with the sadness and love they have cobbled together into a life, with opportunities missed and those misguidedly taken…”

I read this book a couple of years ago now, but recently stumbled upon a review I had written of it, and as I enjoyed the book so much, felt it should be shared:

Considering that I was drawn to the book originally by the emphasis on the controversy of the storyline, I was somewhat disappointed by what it had to offer in that respect.  Having read stories of this nature before, I was not surprised by much of what I found.  For those who don’t know, The Kingdom of Childhood is a novel by Rebecca Coleman that focuses on the sexual relationship between Steiner teacher Judy and teenager Zach, who is both a Steiner pupil and friend to Judy’s son, Scott.  However, the book also covers other issues – from Judy’s failing marriage with her PhD-obsessed husband, to Zach’s experience of moving away from home, trying to establish himself in a new school, and battling with some very normal teenage anguishes aside from his affair with the kindergarten teacher.

For me, an interesting element of the book was the frequent change of viewpoint.  It took a little while to get used to, but in the end I rather enjoyed getting to hear the events from multiple perspectives.  It also meant that I could eventually draw a seemingly objective opinion of my own on the relationship between Zach and Judy.

I found many aspects of the book very easy to relate to.  Not so much the teacher-pupil relationship, but of the connections between friends and family.  It felt very realistic, which was helped along by the detailed insight into the Steiner way of life.  I actually have some experience of Steiner schools myself, so it took no effort at all to lose myself in the world that Rebecca Coleman has created.

My rating is based on the fact that Rebecca Coleman creates a very vivid and realistic environment for the reader to get lost in.  The characters are engaging, and I didn’t feel cheated by the ending – I was appreciative that Coleman did not fall into that “happily ever after” trap, as the sort of relationship pursued by Judy and Zach rarely can end happily.

My only criticism is that for a moment around a third of the way through, I did begin to question where the story would lead, especially when the flashbacks of Judy’s childhood began.  Fortunately, Coleman easily ties all loose ends together, and all events – both past and present – add depth to the story and characters, and are of complete relevance to the plot.  Overall, a brilliant and thought-provoking story.