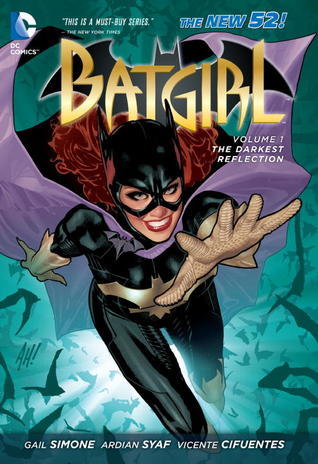 Before I start, I should say that due to the order I managed to find the books in, I actually read volume 2 before 1.  It didn’t really have any effect on my experience; I loved them both anyway.  This has actually been my first experience of reading DC comics, and I finally understand what all the fuss is about (see my post about my epiphany regarding graphic novels).

I am not familiar in the slightest with Batgirl – in fact, I hadn’t even heard of Batgirl until I started reading these – so I can only pass judgement on what I have read so far of the new 52 series.  Before this, my Gotham experiences mostly considered of seeing Batman on lunchboxes and seeing the Joker, Harley Quinn and Catwoman cosplays at comic conventions.

For those who are also new to Batgirl (unless I’m the only one this clueless), she is the vigilante identity of Barbara Gordon, the young and intelligent daughter of Gotham’s police commissioner.  After being shot in the spine by the Joker, and left wheelchair-bound, the new 52 series begins with her recovery, as she builds the confidence and abilities to fight as Batgirl again.

I thought Barbara was a fantastic role model; she is intelligent, independent, strong.  She is young though, and this is constantly reinforced as she frequently makes mistakes and learns, captured in glimpses of her internal monologue.  A somewhat quirky revelation I made whilst reading was that I found that after years of being aware of Batman, meeting him “for real” was quite exhilarating, rather like having a fangirl moment over meeting a favourite celebrity.  I loved his relationship with Batgirl – he really cared for her, and I’m excited to learn more about their shared history as the comics progress.  All that has been revealed so far is that Batgirl trained under Batman, but the how and why are still a mystery.

Overall, my little taste of Batgirl has been a brilliant and somewhat addictive experience.  My only criticism is that I couldn’t help but roll my eyes at some of the ‘intimate’ angles of the illustrations – I can see an excellent storyline beneath it all, but I can’t shake the feeling that the art is really aimed at a specific demographic.  Saying that, Barbara’s wit and strength balance out her character nicely, so it isn’t that much of an issue.